What is Geothermal Energy 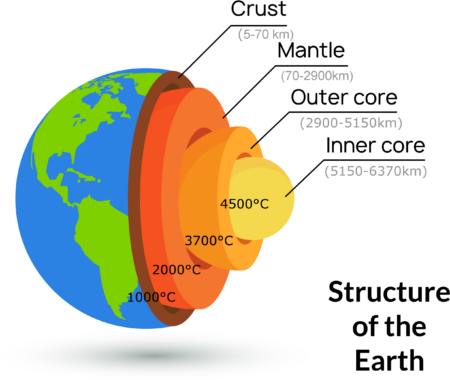 Geothermal Energy is the thermal energy that comes from the earth’s core. It´s the thermal energy that is contained in the rock and fluids beneath Earth´s crust. The temperatures of the earth rise from the surface to the core where the heat can reach up to 5.000 °C.  The heat from the core is constantly radiating outward and warming rocks, water, gas, and other geological material.

If the rock formations underground are heated up to 700 to 1.300°C they can become magma. Magma exists in the mantle and the earth´s lower crust. The Magma heats nearby rocks and underground aquifers where some of this super-heated water rises back to the surface of the earth where it emerges as hot springs or even geysers. Sometimes the hot water becomes trapped below the surface as a geothermal reservoir.

Geothermal energy can be found almost anywhere in the world from the shallow ground to deep under the surface where it can be harnessed by drilling wells into the geothermal reservoirs.  The hot water that rises emerges at the surface as steam which can be used to drive turbines producing electricity. If the water is not hot enough to produce steam, it can still be used to heat homes and businesses (direct use).

Geothermal is a clean, green sustainable energy source and scientists estimate the earth’s total geothermal resources to amount to 50,000 times the energy content of all the world’s fossil fuels.

Geothermal energy utilization is a technically proven and financially feasible method of powering green communities that will have a great role to play in the world’s future fight against air pollution and global warming.

For a sustainable energy supply cascading usage of geothermal is very important where the heat can be re-used for more than one application. Direct heat use is the oldest and most common utilization of geothermal energy.

While the highest heat (>100°C) is used to produce electricity the waste heat from that or a direct use from a lower temperature source (<100°C)can be used directly for more than one application.

The efficiency of a source is increased dramatically with cascading usage, what is a waste for one application is the ideal heat source for the next application.

After district heating where the ideal heat is 65-85°C, the source cools down making it ideal for Greenhouses or Aquaculture.

Low and medium temperature (<100°C) geothermal fields can be found in most countries around the globe. Such fields can hardly be utilized for power generation mainly due to economic reasons. These fields might however fit perfectly for direct use applications.

As long as reinjection natural balance is kept with re-injection

The only one of renewables that is baseload. An exceptionally constant source of energy, meaning that it is not dependent on neither wind, sun, or rain and available all year long 24/7.

Geothermal has a dramatic effect on the quality of life and health of people where it has replaced power plants burning fossil fuels for heating and cooling.

Geothermal is good for the environment, it´s a natural hot water source and extracted from the earth without burning fossil fuels and it produces practically no CO2 emission.

A small area of land is needed for re-injection and production wells and generating stations are located right on-site, resulting in less impact above and below the surface than other energy operations.

The Icelandic Model
Where does the geothermal experience in Iceland come from? To answer this question, it is necessary to look at the long history of energy utilization in Iceland. In 2008, the country celebrated 100 years of geothermal district heating. This long tradition of geothermal utilization for heating and later for electricity production that began in 1969 and has been continuous until today has helped Icelandic geologists, engineers and geothermal utilities to achieve necessary know-how and expertise in the geothermal energy sector through trial and error.