Heating and Cooling Cities in the 21st Century will Determine the Outcome of the Battles Against Air Pollution and Greenhouse Emissions.

According to IRENA at least half of energy for buildings goes to space heating or hot water.

Fossil fuels still account for over 80% of global energy consumption.

AIR POLLUTION – SOMETHING IS WRONG

Pollution is the world’s largest environmental cause of disease and premature death. Air Pollution costs the world more than USD 5 trillion/year in Social Welfare and 6.5 million lives are lost each year due to air pollution by burning fossil fuels.

High Particulate Matter (PM 2.5) is an air pollutant that is a high concern for people´s health.  PM 2.5 are tiny particles (1/30 of a human hair) in the air that reduce visibility and the air appears hazy when levels are elevated.  Long term exposure to high PM2.5 poses a risk to the environment and overall health of the population.  The PM 2.5 particles can travel deep into the respiratory tract and into the lungs and cause both short- and long-term problems for people that make them more vulnerable to face viruses that attack the respiratory system.

Where does PM 2.5 come from?  The highest levels can be found in cities with high traffic, cars, transportation vehicles, etc., but also from the burning of fuels such as wood, heating oil, coal, and natural sources such as forest and grass fires.  Today it is believed that 50% of the energy consumed by cities is due to heating and cooling of cities and most of them still burn air-polluting fossil fuels to meet the energy demand.

THE SOLUTION – LESSONS FROM ICELAND 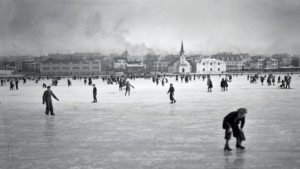 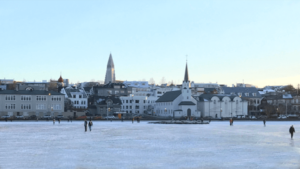 Reykjavik, Iceland that is today described as the cleanest capital in the world was once highly polluted.

Up until 1940 the city had to rely on its heat source by burning fossils fuels that meant the city was covered with black smog and highly polluted.

That all changed after installation of District Heating in the city that harnessed natural hot water to heat up the houses.

The benefits of heating with geothermal were truly a game changer from Iceland both economically (7%+ for GDP) but also it´s dramatic positive effect on quality of life and health as well.